A villain of little words, speaks.
Performed by Jonathan CobbWritten by Tilly LunkenDirected by Victorine PontillonAfter William Shakespeare’s Much Ado About Nothing.
In Souliloquy is devised and produced by V&TDon John In Souliloquy is part of Cycle 4 of this project
Music:
Sneaky Snitch by Kevin MacLeod (incompetech.com) Licensed under Creative Commons: By Attribution 3.0creativecommons.org/licenses/by/3.0/ 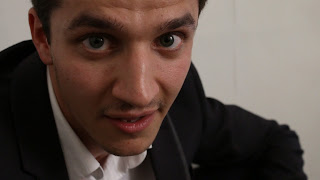 So Don John is a character I wanted to write but kept putting it off because he just didn't fit into my headspace. But with our fourth cycle I was determined to write him - he doesn't speak much in the play, declaring himself a man of little words but you can just tell he is dying to let fly and deluge of reasons for why he is the way he is.
Write me a sexy villain - Victorine's instructions - and there we are. Here he is! Absolutely dripping with the bad boy charisma. There's something mesmerising in the tight shot, unequivocal gaze and Jon's great performance that totally makes you feel 'Yeah sure, this guy really knows what he's talking about. Let's smash through the illusion. Boom!'
This was very satisfying to write, partly because the character has so few lines in Much Ado despite being the main plot driver. Giving him the platform to sound off was a lot of fun.
Don John is the last of our 2016 Cycles - and it's a lovely bookend with Juliet - both heartbroken in different ways.
Labels: Behind the Scenes Digital Theatre In Souliloquy In Souliloquy Cycle 4 Monologues Poetry Political? Me? Process Shakespeare Shakespeare400 ShakespeareLives Souliloquies Writing

Onomatopoeia
Words - What we read, express, perform and write. tillylunken.com